This is one of my favorite sights!  Ever since I was a child, seeing this arch meant a whole lot of fun was coming my way.  It’s no different now as an adult but now I get to share that joy with my child.

From the moment we arrived, the excitement was evident on my child’s face – the husband wasn’t far behind either.

We took some pictures with characters…

Silly Baby even kissed Minnie on the nose! This is a child that’s terrified of Santa and the Easter Bunny, but he had no problem with Mickey, Minnie, and Goofy.

He walked hand in hand with a princess…

He drove around some…

And we all got a little silly…

He enjoyed some ice cream on a really hot day.

And splashed around in a fountain.

And we all took a train ride when we were too tired to do anything else.

And the one thing I was worried about turned out to be a non-issue.  He napped everywhere!

Then there was the all important first – the reason for our trip to begin with: His First Haircut!

At first he was fine getting his haircut, until the barber next to him turned on the blow dryer.  It was downhill from there.  Thankfully he was almost done when that happened.  We received a baggie with his hair, a certificate, and the mouse ears pictured above that is embroidered with My First Haircut. Overall the first haircut experience was just as magical as the entire trip and I am so glad we opted to have his haircut done at Disney.  They were very patient with him and did a great job! And when he gets older I have amazing pictures to show him of his first trip to Disney and his first haircut.

Having a toddler at Disney definitely slows down your pace and you just need to adjust to that, but watching his face light up when he meets Mickey or hearing him clapping and saying “Yay!” during the fireworks display makes it all worth it. 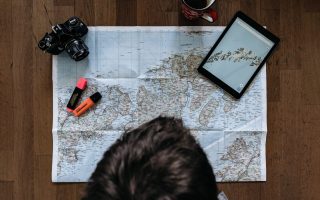