I have been watching the show Masters of Sex since the very beginning because they base the show on the work of Masters and Johnson, who, like Kinsey, were sex researchers. My major in Women’s Studies led me to read their work, so naturally, when the series was beginning I was intrigued. Last night’s theme was about maternal mortality. The episode revolved around a C-section birth and the unfortunate death of one of the characters. This got me thinking about the many ways in which both my births could have gone. This particular character had a very similar birth experience as me. Her child was breech and she ended up having to have a C-section just like I did. So this episode hit a little close to home. Unfortunately, and I hope I’m not spoiling this for anybody, the character died in childbirth. In the end, it was a heartbreaking story and it really made me very emotional and I drew parallels between what I saw and what could have gone wrong with Sebastian’s birth. I realize I’m very blessed in having had two successful births even though one of them didn’t go according to plan. I survived, I have two beautiful children who are healthy and a lot of women are not so lucky.

According to the CDC, pregnancy-related deaths are on the rise in the United States for unknown reasons with an all-time high of 17.8 deaths per 100,000 live births in 2011. The rate has dropped some but is still much higher than the 1987 rate of 7.2 deaths. There could be many reasons for this. Some theories are that the data recording methods have changed, higher obesity rates, and higher maternal age rates. But none of these reasons can be proven as being a factor for why maternal mortality rates are so much higher now than they were 30 years ago.

With both my pregnancies, I was considered to be advanced maternal age (AMA) and was obese for both pregnancies putting me in the high-risk category. Since my first was breech, it was considered a pregnancy complication requiring a c-section and my second was born vaginally which was another complication due to the possibility of uterine rupture (albeit it is infinitesimal, but the possibility is higher than a non-VBAC delivery). So many things could have gone wrong, but they didn’t and I am alive and able annoy all my personal Facebook friends with a million pictures of my kids.

I am a big believer in a more hands-off approach to childbirth and considered a home birth for both my kids, but the thought of it made my husband nervous for my first so I opted for a hospital birth, and the thought of a home VBAC made me nervous for my second. Would my outcome have been different for my births if they were born at home? Would I even have been able to find a midwife willing to deliver a breech baby at home? I think that on its own is a rare bird in the US (please correct me if I’m wrong). That means I may not have had much of an option anyway. My OB didn’t give me the option to have a trial of labor with Sebastian, when a vaginal breech birth is a possibility, even if it is a more complicated possibility. But is it truly more complicated than a C-section or is it merely a matter of training vs. what’s easier for the OB? I’ve done reading on the subject and I do know that OB’s are not really trained to deliver vaginal breech babies anymore because it is a riskier delivery and a more time-consuming one as well, and can also lead to more lawsuits because of birth trauma. But doctors should be trained to allow the mother the option and allow her to weigh the risks after all the relevant information is given to her. And this is all I will say about this topic because I could go down a rabbit hole on this subject alone.

I do wish my first birth experience had gone differently, but I’m alive and my son is alive. That’s not to say that the emotional aspect of the way my birth experience went should be negated because it absolutely shouldn’t, but I am grateful for our health and that we are both alive to drive each other bananas. I am thankfully not one of the 17.8 who are no longer alive to enjoy their child. 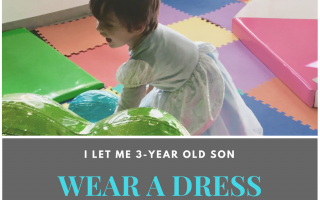 Dear Woman at the Checkout Line

What Makes a Good Mother

Preparing Myself for the Unexpected